We know the story: robots will continue taking most of our jobs. Telemarketers, truck drivers, lawyers… we seem to be all in this together (High School Musical references apart).

But what if you’re a social media influencer?

Meet Miquela Sousa: This American-Brazilian model is 19 years old and lives in LA. She’s an Instagram influencer who stands for LGTB rights and campaigns for youth justice.

And she doesn’t exist.

Lil Miquela is a CGI (Computer-generated Imagery) Influencer created by the team of professionals at “Brud”. Brud is a company specializing in Artificial Intelligence and robotics who define themselves as a “transmedia studio that creates digital character driven story worlds”.

You can take a look at Brud’s site here. (It’s pure art).

Miquela’s publicist –if one understands Miquela as a brand– confirmed that she is indeed making money through brand collaborations. Meanwhile, the company behind it recently received $6 million from Sillicon Valley.

Considering that more than 90% of luxury brands employ influencer marketing to get to their desired audience, fashion and cosmetics industries may be fields where such digital models can make an impact. However, Miquela seems to be bringing this to another level by regularly collaborating with other artists and expressing her opinion on controversial topics. Not only that, she made it to New York City’s Times Square some weeks ago.

Some argue that what makes Lil Miquela so interesting is that she behaves and communicates just like a real human would:

So to recap, some stuff Lil Miquela has and most of us don’t:

Anyways, we have consciousness 🤗

Lil Miquela is not alone:

Shudu is “the world’s first digital supermodel”. She gained popularity after Fenty Beauty reposted one of her pictures wearing one of their lipsticks. 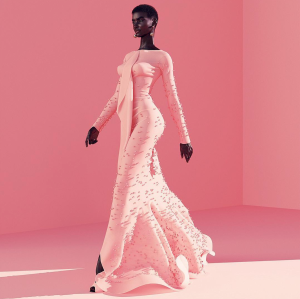 Designed by British photographer Cameron-James Wilson and his team, she’s a way for her creators to express themselves artistically “in the age of filters, airbrushing and photoshop”.

In practical terms, this doesn’t differ much from real influencers, as cosmetics products are, according to experts, mostly applied digitally to models’ faces in make-up advertising campaigns.

Some argue that celebrities will start launching their digital counterparts soon. Others state that brands will start building their own digital models to represent their values and use them as influencers. Being particularly controversial topics, I wonder to what extent this is really harmful when real human models’ bodies are regularly edited to a certain extent. Perhaps knowing that what’s behind the screen is not a real person would help societies not to suffer physically and mentally in order to achieve impossible body standards.

Influencers don’t need to be real to have an audience. After all, they tend to represent values that users are attracted to, and use that as a base to start growing. One doesn’t have to be real to portray an image of being socially conscious, proudly American or vegan. You just need someone creating content behind the screen.

Often having to deal with reputation issues after their ambassadors caused its loss, brands may encounter a good solution in digital influencers. The good thing about them: they will most likely not be involved in scandals and cause a reputation problem to your brand. When it comes to PR, digital influencers are easier to “work with”. Simply because when they are not at work, they don’t exist.

Most content we see online is not 100% real after all. Ikea has been using 3D renders in their catalogs since 2005. That cute living room packed with fluffy cushions? It is a 3D visual that has been digitally created by a team of artists. The “passion red” lipstick on that model? It has been most likely added digitally, too.

Miquela and Shudu may still look avatar-like. Experts argue that artists and designers tend to not achieve perfect human looks to maintain a certain entertainment, as it would be scary for some to deal with hyper-realistic “3D humans” nowadays. However, the level of realism can be significantly improved. Just to give you an example, the following image was created digitally. It is not a picture:

In these lines, a Japanese (3D) girl named “Saya” has been a work in progress for years. Seems like it has been enough time for her designers to create the perfect hair for her 💁🏻‍♀️.

Marketing & PR stunt or art? Digital models may be here to stay. I can’t wait to see in which directions does it evolve and how does it influence our lives (let’s hope for good) 🧚🏼‍♀️

My recent internship at Th3rd and Human Alloy may or may not have partially inspired me to write this piece 😛. Being really interested in how innovations are implemented and affect societies as a whole, I find digital content and interaction one of the future trends that citizens will have to adapt in a major scale, rather soon.

I would love to know some of your thoughts on this (as most of my friends are not really into robots😫). You can always contact me at claraescoms@gmail.com or social media channels ❤️ I hope you liked it!